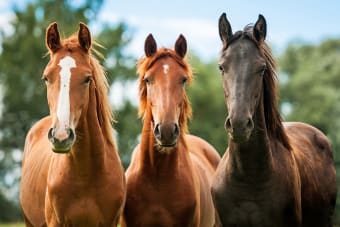 Infectious diseases are a serious risk to your horse's performance, long-term health and longevity. Equine vaccines are an effective way to help your horse stay healthy and performing at their very best. Below, our North Fort Myers vets discuss important horse vaccines and a horse vaccine schedule.

Infectious diseases in horses are most commonly caused by bacterial and viral infections. Various bacteria and viruses, collectively known as "infectious agents," are spread in a number of ways, including direct contact with infected horses, ingestion, inoculation into wounds, transmission by insects, and many others.

Vaccines are made by combining a specific infectious agent, (either inactivated and active), with a delivery liquid. Vaccines are formulated to encourage the immune system to create antibodies to fight against specific diseases.

The American Association of Equine Practitioners (AAEP) lists 4 yearly horse vaccinations as 'core vaccines' that should be given to all horses in the United States on an annual basis. These include the West Nile Virus, Eastern and Western Encephalomyelitis (also known as sleeping sickness), tetanus, and rabies.

EWT/WN protects against Eastern and Western Encephalitis, Tetanus, and West Nile Virus. This is a four-way vaccination, which mixes various vaccines in a single intramuscular injection. You can administer each of these immunizations separately, but the convenience of a single IM dose is enticing. Because horses are very sensitive to tetanus, this is a vital immunization to receive for your horse every year.

According to the American Association of Equine Practitioners, rabies immunization is one of the 'core' vaccines that every horse should have on an annual basis. Rabies can cause neurologic abnormalities in horses, making them appear 'dumb.' Any horse that dies as a result of neurologic episodes is a candidate for rabies testing and should be treated with utmost caution to avoid rabies exposure.

Risk-Based Vaccines are suggested in specific conditions when the risk of contracting the disease in question outweighs any disadvantages of using the vaccine. The use of risk-based vaccines may differ regionally, between populations within an area, or between individual horses within a given community. When to use these immunizations should be decided jointly by you and your local veterinarian.

These vaccinations can be given annually or semi-annually, and include diseases like Equine Flu, Equine Herpes (also known as rhino), Strangles, and Potomac Horse Fever.

Influenza/rhinopneumonitis vaccination is not one of the AAEP's "core" vaccines, but it is strongly recommended on a semi-annual basis. Flu and Rhino are both contagious respiratory infections that spread from horse to horse. The Flu/Rhino vaccine may be unnecessary if your herd is mostly isolated and rarely travels. While this is an intramuscular vaccine, there is also a popular intranasal influenza vaccine.

Strangles is a bacteria that causes regional and systemic lymph node abscessation, resulting in pirulent or pus discharge from the nostrils. Your horse will have a high fever, and you will frequently hear a hacking, strangled sound as he breathes, thus the term. Strangles is usually not life-threatening, but they can be. It can be fatal if the bacterium infects the internal lymph nodes or if the regional lymph nodes in the throat clasp and obstruct the airway.

Potomac Horse Fever (PHF) is a localized bacteria with an expanding distribution. It's a bacterial infection that horses get from eating dead mayflies and other insects and can cause fatal diarrhea. Although most common in the northern United States, there has been a surge in recent years in other areas of the country. Horses that have PHF but have been vaccinated appear to be less unwell than horses that have never been immunized. You should consult with your vet to decide if the Potomac Horse Fever vaccine is right for your horse.

Note: The advice provided in this post is intended for informational purposes and does not constitute medical advice regarding pets or other animals. For an accurate diagnosis of your animal's condition, please make an appointment with your vet.

Is it time for your horse's vaccinations? Contact our experienced vets at Van Roekel & Associates today to book an appointment for your horse.

We are accepting new patients at Van Roekel & Associates! Our veterinary team is dedicated to the care of North Fort Myers dogs and cats, horses, and farm animals. Reach out today to book your animal's first appointment.